Building No. 635 which is located in Poštovní Square has been used by the public since 18 October 1931. The building of the municipal library and armory of the town´s volunteer firefighters and paramedics, which was designed by architect Emil Rösler (Plauen / Saxony), was built by the municipality of Aš on the site of the former firehouse.

The library was located on the second floor of the building, on which the storehouse, the book counter, the study hall, the lecture hall, the director´s office, the cloak room as well as sanitary facilities were situated.

Firefighters used the rest of the building – from the basement to the attic. In the cellar, in addition to storage space and boiler rooms, there is a trough for washing and pressurization of fire hoses. The first floor was occupied by a workshop, a warehouse, a room used by the guards on patrol as well as sanitary facilities and a garage, which was designated for the storage of firefighting equipment and two ambulances used by rescue workers. The third floor was designed to accommodate the team. In addition, this floor also houses the conference room of the fire brigade. Architect Rösler also managed to solve the problem of hoses drying – the hose drying tower was placed inside the staircase of the building (for a better imagination ... today a lift could be placed there).

The library was moved out of the building after World War II. The vacated space was used by the fire department, which needed more space for its activities due to gradually increasing demands for its services and professionalization. However, the fire brigade left the building in March 2006. The municipality began to use the entire building for its needs – the garages are used by the town police as well as the municipal office. On the second floor there is an ethnographic exhibition of the Aš Museum and the third floor is occupied by municipality-owned flats and used for the purposes of public housing.

Emil Rösler was born on December 31, 1874 in Vlčí Hora (in the district of Děčín) and died in 1954 in Plauen, Saxony. In the 1920s he settled in Plauen, where he opened an architecture office. Buildings designed by him can be found both in Saxony as well as the Czech borderland (Dresden, Plauen, Aš, Děčín, Rumburk). 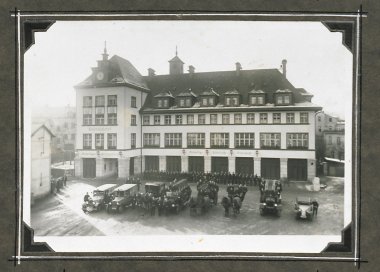