The setting up of the Stone Crosses Research Society was initiated by external workers of the Aš Museum (1) in the years 1981-1984 in order to create a nationwide register of monolithic crosses and other minor monuments and to protect them (2). The Society first met in September 1984, although some of the society´s members had already cooperated with the Aš Museum in person or by mail several years earlier. This meeting established a tradition of annual meetings of the members of the Society which was set on the last weekend in September. Approximately 70 to 80 people from the Czech Republic, Poland, Slovakia and Germany participate in the meeting every year. In addition, nearly 200 correspondents are involved in cooperation with the Society.

In recent years, members of the Society returned nearly 300 stone crosses to their original state. In the districts which fall under the jurisdiction of the municipality of Aš, Cheb and Marienbad, stone crosses were found and built particularly at the cemetery in Aš, three crosses in the village of Polná, in Hazlov, near the former restaurant called Myslivna in Cheb, near the former village of Bříza, in Dolní a Horní Hraničná , in Dolní Paseky, two crosses in Dolní Žandov in Úbočí, in Dvorek, in Hněvín, in Hůrka near Libá, in Kopaniny, in Lipná, in Marienbad, in Maškov, in Milhostov, in Mlýnek, in Špitálský Vrch, four cross fragments were found in Podhrad, in Povodí, in Vlkovice and Zavišín. In 1985, during construction work of the land between Horní Ves and Dlouhé Mosty, a stone cross with a fragment of another stone cross lying underneath was uncovered by a bulldozer. Both stones are on display as part of an archeological exhibition in Cheb Castle. In the 1960s, after filling the Jesenice dam with water, another cross was covered by water. This cross was, however, rediscovered in 1990 when the level of water in the dam was lowered. This cross has been restored and now stands near the Church of st. Oldřich in Dřenice.

Many of these stones were saved by the citizens themselves, especially in recent years thanks to the publications and educational work of our coworkers. There are about 200 stones that have been saved in recent years. Most of them were discovered while the land was being improved and whilst a monument was being transported to a safe place. In some cases, municipalities with the help of the herritage conservation authority, or the employees of regional heritage authorities were responsible for professional restoration of stone crosses, or for the production of a replica. For example, the mayor of the Dobšice village, found stone crosses that stood along the road to Dyje. He commissioned an exact copy of these crosses and placed them in a park in front of the kindergarten and municipal authority. The original stones serve as decorations in the conference room. At present, the two crosses have been used as part of the village coat of arms. The village coat of arms contains two rounded gold crosses with an enlarged pedestal in a green shield separated by a curved silver bar. The emblem was granted by the chairman of the Chamber of Deputies - Miloš Zeman in 1997. 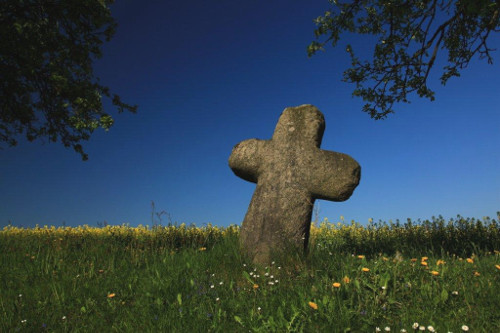 Even friends from distant regions worked in the same way. They rebuilt or restored stone crosses in Arnoltov, Hruškofá, Kostelní Bříza, Kokašice, Křímov, Svojšín, Ovesné Kladruby, Opatov, Hněvín, Ždírnici, Královské Poříčí, Ostrov, Polínka, Drahovice, Krásné Údolí, Hunčice, in the forest district in Pírka, Dobrá Voda, and elsewhere. Members of the Society and friends have gotten together to protect and preserve dozens of other sights in the neighborhood. They should be acknowledged for their work. It has not been possible to include the actions of citizens who were inspired by the work of the Society. They have been working mainly on the restoration of other minor monuments, little chapels, small technical buildings, but lately they have been reconstructing larger buildings such as castles, fortresses, mills etc.

Restoration of minor monuments was mainly carried out by members of the Society free of charge and they covered the travel expenses themselves.

Only stone plinths and pedestals of iron crosses whose restoration may require a certain amount of costs and investment have been preserved so far. In the future, the Society plans to restore the monuments in the southern part of the Aš and Cheb Regions, which requires finding a foundry, which would cast the missing crosses based on our models. In the Kralovice Region, there is one such foundry which is involved in cooperation between the Aš Museum and the Museum in Moravský Týnec, making it possible to arrange for the production of the missing cast-iron crosses in the near future. Their production costs are estimated at no more than 5-6 thousand crowns per piece. It depends on the town officials or wealthy sponsors how many monuments will be restored in the coming years.

In 2005, the crosses in Zelený Háj and Mýtinka as well as in Lipná and three crosses in Polná were restored thanks to donations of a benefactor.

In the year 1990, the publishing house Československý Spisovatel (Czech Writer) published a book of short stories entitled Conciliation Stones (Smírčí kameny) written by Vladimír Preclík. In the year 1992, the publishing house Melantrich published a book called the Stones of Repentance (Kameny pokání) written by the same author. In 1997, in cooperation with the workers of the Aš Museum, a catalogue of stone crosses was published as part of the book entitled Stone Crosses of Bohemia and Moravia, and in 2001, the second edition of this book, supplemented by 273 items, was published. A catalogue of 300 other items was published in the same graphic design by the Aš Museum in 2007. Czech Television as well as Czech Radio annually broadcast programs focusing on the topic of stone crosses and providing information on the work of the Society. The Aš newspaper as well as the regional daily press devote their articles to this topic as well.

In the past, the Aš Museum organized a themed exhibition of watercolors by Karel Šrámek, a photo exhibition of minor monuments by Slovak photographer Marián Šangala, which had been prepared by Mrs. PhDr. Claudia Buganová of the East Slovakian Museum in Košice, as well as other exhibitions of stone crosses photos by Petr Zbořil and Stanislav Wieser.

In cooperation with other members of the Society and representatives of the Heritage Institute in Central Bohemia and Karlovy Vary Region, the Aš Musem is responsible for the registering of the stone crosses found in the Central Bohemian as well as Karlovy Vary Regions into the national register of immovable monuments. The Museum workers are responsible for dealing with inquiries regarding the location, restoration, relocation and legends surrounding the stone crosses in writing. In addition, they send extracts from literature to those who are interested, cooperate with editors of national and regional newspapers (Mr. Wojtucki in Poland, and prof. Azzola in Germany). In a few cases, they have also provided professional help to the Police of the Czech Republic and advised secondary school students as well as university students who had decided to write about stone crosses as part of their universisty theses/ dissertations (3).

Members of the Society as well as workers of the Aš Museum give lectures in the neighborhoods of their town, namely in Karlovy Vary (Karlsbad), Mariánske Lázně (Marienbad) and Františkovy Lázně (Franzensbad), but also in Prague, Ustí nad Labem, or in Cheb. In 2003 in the town of Teplá, the Aš Museum in cooperation with the Stone Crosses Research Society organized an international seminar for employees of the cultural heritage authority. The seminar was also attended by cultural heritage authority employees from the Netherlands, Hungary, Germany, Poland, Austria, Slovakia as well as the Czech Republic. This two-day seminar was attended by a total of 270 people. 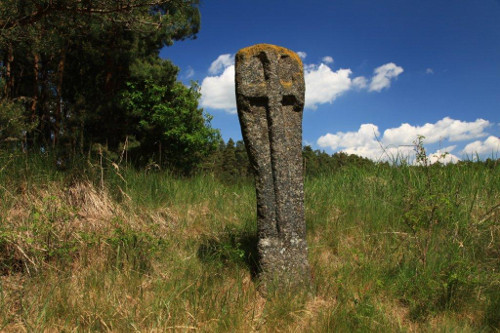 The Society members attended the Czech-German seminar focusing on the history of the Chebsko and Vogtland border regions and gave a lecture entitled "Reconciliation crosses found along the roads in the Chebsko and Vogtland Regions". The seminar was held in Riedelhof near Erlbach in Germany. On this occasion, the Aš Museum lent out the exhibition entitled "How We Built the Crosses," which documented more than 30 restoration works. A member of our Society, along with a German colleague used the Lipno granite from which they chiselled two stone crosses which were then erected by the seminar participants near the courtyard as a symbol of friendship. The Society members regularly participate in congresses of cultural heritage authority employees in Germany and Poland and present the work of the Society by publishing articles both in professional as well as the daily press. In recent years, thanks to Czech Television and Czech Radio some broadcasting time has been devoted to the problems of stone crosses and the work of the Society.

1 The Aš Museum Director appoints the secretary of the Society. Every last weekend in September, an annual meeting is held where the specific tasks of the Society are decided.